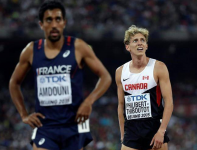 Graham Hood, in 1995, is the only Canadian to win the world-famous indoor race at the Millrose Games in New York City

From The Canadian Press

When Charles Philibert-Thiboutot races the Wanamaker Mile, he'll be adding his name to one of track and field's greatest stories.

The 25-year-old from Quebec City has been awarded a lane in the marquee race of New York's Millrose Games, the world's longest running and most prestigious indoor meet.

"While I was running as a collegiate (for Laval Rouge et Or), when you get to see a track meet on TV, that does not happen often, and Millrose Games is broadcast on NBC, so I was able to watch it live a few years," Philibert-Thiboutot said.

"It was always really cool to see that event unfold and to see how the Mile was the king event, and how there was excitement for the Mile."