Olympic Silver Medalist Leo Manzano Signs with HOKA ONE ONE 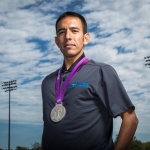 U.S. 1500 meter star will showcase revolutionary running brand and play a key role in the company’s development of its first racing flats and spikes

RICHMOND, Calif. – HOKA ONE ONE® has announced the signing of 2012 Olympic silver medalist Leo Manzano, who specializes in the 1500 meter and Mile distances, to a multi-year agreement.

Manzano, 29, was a five-time NCAA Champion at the University of Texas, and has been ranked among the top three Milers in the U.S. for the past seven years. A model of consistency, he has made every U.S. Olympic and World Championships team since 2007. Known for his signature kick, Manzano was in sixth place coming off the final turn at the London Olympics before storming up the homestretch to earn a silver medal—the first Olympic medal of any kind for the U.S. at 1500 meters since Jim Ryun in 1968.

As part of his new relationship with HOKA ONE ONE, a division of Deckers Outdoor Corporation (NASDAQ: DECK), Manzano will play a key role in the company’s development of its first racing flats and spikes.

“I’m honored to represent HOKA ONE ONE. I feel blessed to have connected with such a game-changing and innovative company that is led by runners who understand the needs of runners,” said Manzano who sports a swift Mile PR of 3:50.64. “I hope to leverage this opportunity to showcase how HOKA’s brilliantly engineered products benefit runners of all distances.”

“Adding Leo to the HOKA family elevates our brand visibility and is a testament to the momentum we are gaining in the highly competitive running industry,” said Jim Van Dine, HOKA ONE ONE Brand President. “Leo is not only an Olympian and track-and-field all-star, he’s also a person with great integrity and character. We look forward to closely collaborating with Leo on product development—specifically racing spikes and flats.”

Until now known primarily for its remarkable success in ultra-marathon and trail-running communities with its revolutionary oversized cushioned shoes, HOKA ONE ONE recently received the 2014 Competitor Magazine Fit, Feel, Ride Award for Best Innovation for its newest shoe, the Conquest for men and women, designed for runners of all distances.

Manzano's relationship with HOKA was negotiated and will be managed by Hawi Keflezighi of HAWI Management.

In February 2014, HOKA also became a sponsor of Bring Back the Mile, a national campaign to elevate and celebrate the storied distance. In addition to the BBTM sponsorship, HOKA ONE ONE is sponsoring a number of athletes, including Nicole Schappert (Mile PR 4:30.65) and Mike Rutt (Mile PR 3:57.18) of the NJ/NY Track Club as well as 2013 USA Masters Road Mile champion and 2008 Olympic marathoner Magdalena Lewy Boulet.

About HOKA ONE ONE
Since 2010, HOKA ONE ONE, a Deckers Outdoor Corporation brand, has been on a quest to bring new and elevated benefits to all runners. HOKA ONE ONE is a shoe for all runners, from joggers to elite athletes looking to improve their performance. Please join us on our journey and keep running as we continue our pace, leading the running revolution. Visit us at: www.hokaoneone.com