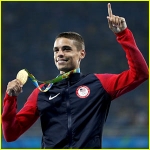 "Matthew's presence alone will be incredibly impactful for our program... He will be such an amazing role model for our team; an example of what it takes to be a true champion both on and off the track."

From University of Washington Sports

SEATTLE – The reigning Olympic champion and already a legend in American distance running, Matthew Centrowitz, will be a part of the Husky track & field team this year, coming to Seattle as a volunteer assistant coach. The first American to win the 1500 meter Olympic gold medal since 1908, Centrowitz won another U.S. 1500m title just last month, his fifth outdoors.

Centrowitz, 28, established himself as a rising star at Oregon, where he won three Pac-12 titles and the 2011 NCAA 1500m crown. At Washington, he will be reunited with his college coaches, Director of Track & Field Maurica Powell and Head Coach Andy Powell, as well as his Oregon teammate and friend Chris Kwiatkowski, who was named an assistant coach for the Huskies on Thursday.

"I'm very excited to be reunited with the Powells, who helped guide me through my collegiate career and beyond," said Centrowitz. "I'm also grateful to continue having Chris Kwiatkowski in my corner. These relationships have been key to my success."

"I'm really looking forward to helping the University of Washington program grow into a national powerhouse."

Andy Powell said that Centrowitz "will be an invaluable addition to our program. We are so excited to be working with him again. He will make a huge impact on all of our student-athletes."

Centrowitz was fourth at the 2012 London Olympics in his Olympic debut, then ran a tactically flawless race in the 2016 Rio Olympics final to hold off the world's best and end the century-long American drought. He also has a silver and bronze medal from the World Outdoor Championships and a 2016 World Indoor Championship gold medal.

Said Kwiatkowski, "Matthew's presence alone will be incredibly impactful for our program. At all levels, his achievements have reached the pinnacle of our sport. He will be such an amazing role model for our team; an example of what it takes to be a true champion both on and off the track."