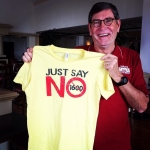 As a three-time Olympian and politician, Jim Ryun is accustomed to a whirlwind schedule, so this week in Lancaster County was nothing new.

But, with a busy itinerary of speaking engagements, appearances and book signings set up by Elizabethtown cross country coach Mark Gallagher, Ryun and his wife, Anne, have enjoyed their first time in the area.

"We've been to Pennsylvania before, but never here,” Ryun said. “Coach Gallagher is the one that worked it all out and it's been delightful."