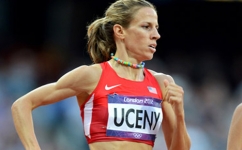 Morgan Uceny was the 2012 U.S. Olympic Trials 1500 meter champion and the #1-ranked runner in the world for that distance in 2011. She'll run a 1500 at the Drake Relays in Des Moines on Saturday against Olympians Shannon Rowbury and Jenny Simpson and high school phenom Mary Cain.

A Cornell graduate, Uceny, 28, spends much of the year now in Loughborough, England, where her coach, Terrence Mahon, has a job with UK Athletics. But for a few weeks, she’s been in California. On Saturday night, in her first race since she was knocked down and did not finish the London Olympic 1500 final, Uceny was ninth in 2:05.50 in an 800 at the Mt. SAC Relays.

Why did you decide to open the year with an 800?
Morgan Uceny: In the past, I did the [B.A.A. Mile], but I just didn’t want to travel that far. I wanted to stay somewhere local. And two of my training partners right now, Sheila Reid, who’s here in San Diego, and Lynsey Sharp from Scotland, one of my new teammates, were also running the 800. It made sense to open up at the same time.