Why the Mile still matters 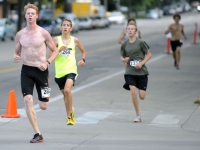 Because we've all run a Mile at least once in our lives, we understand and can be wowed by Bannister's feat.

Sixty years ago Tuesday, Roger Bannister did something many thought would kill him: He ran a sub-four-minute Mile.

For decades, people had speculated about whether the feat was humanly possible, and doctors worried about the toll running 15 mph takes on a runner's body.

But on May 6, 1954, Bannister, then a 25-year-old medical student, ran the Mile in 3 minutes, 59.4 seconds, shocking the world by becoming the first person in history to achieve sub-four. That May day in Oxford became a flash point in the history of running.