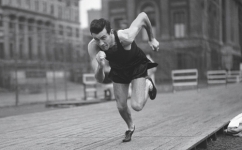 His resilience under unspeakable suffering as Japanese POW during World War II more than earned him every moment of this later heroic acclaim.

Louis Zamperini, a 1936 U.S. Olympian at 5000 meters and the subject of the best-selling book Unbroken, has died at age 97 of pneumonia in Los Angeles on Wednesday, July 2.

Born on January 26, 1917, Zamperini was a top American Miler in the vintage era of middle-distance racing before World War II. He then became one of America's most famous wartime heroes after surviving extreme deprivation on a life raft and in captivity under the Japanese. By the end of his long life his story was renown, thanks to Unbroken, by Laura Hillenbrand, 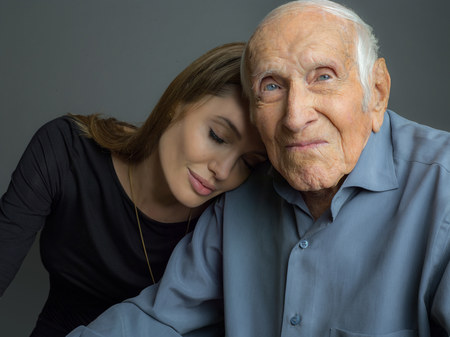 published in 2010. A Hollywood movie based on the book, directed by Angelina Jolie, is scheduled to be released on December 25, 2014.

Zamperini's older brother Peter, himself an excellent high school runner, and some persuasive girls, first induced him to run track at age 15, and in 1934, Louie set the U.S. high school Mile record (4:21.2). It proved an outlet for teenage energies that had previously led him into outbursts of violence and habitual stealing. Part of his problem may have been a sense of being an outsider, as he was born into an immigrant family that moved from New York to Torrance, California, when he was 2, and as a small child he spoke only Italian.

His rapid success as a runner earned him acceptance and esteem. In his last three years at high school he was undefeated, and at age 17 ran a Mile in 4:21.2, unofficially a world high school record. When he graduated at the end of 1935, he postponed college, instead training intensively under his brother's guidance for the 1936 Olympics. He was up against one of the greatest generations of American middle-distance running, with nine men in 1935 and 1936 faster than 4:15 for the Mile when the world record was at 4:06.7. Two of them, Glenn Cunningham and Bill Bonthron, were world record breakers, and two new talents, Archie San Romani and Chuck Fenske, were 10 seconds faster than Zamperini.

Wisely, Zamperini opted to go for the 5000, and in the Olympic Trials at Randall's Island, New York, ran a totally unexpected second, in a virtual dead-heat with the favorite Don Lash. At the Berlin Olympics, inexperienced and overfed, he ran near the back, becoming competitive only on the last lap, which he blazed in a spectacular 56 seconds, cutting through four places to finish eighth in(14:46.8. Chancellor Adolf Hitler asked to meet him, and commented approvingly, “You are the boy with the fast finish.”

In Unbroken, Hillenbrand presents Zamperini's next four years as a thwarted progress toward what should have been an Olympic gold medal in 1940 and a sub-4:00 Mile, but it's more accurate to say he was well up in the mix in a highly competitive generation. At USC, he ran an outstanding NCAA record Mile of 4:08.3 in 1938, 1.6 seconds outside Cunningham's world record, beating Fenske, but lost to Fenske a few days later. Then in a hard-fought AAU Championship, Zamperini was fourth behind Cunningham, Fenske and San Romani. In three outdoor seasons, he never improved on that 4:08.3 (his indoor Mile PR was 4:07.9). In 1939 he ran several good Mile races (4:11.2, 4:11.9, 4:13.6) but in the AAU 1500m he only just edged into third, behind new talent Blaine Rideout and Fenske. He ended 1940, his last season, with a best of 4:11.6, 12th in the world Mile rankings and sixth fastest American. The Olympic Games had been canceled due to World War II.