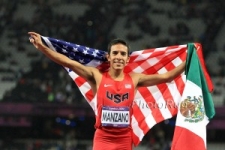 Leo Manzano, the London Olympic 1500 meter silver medalist in 3:34.79, will run the Fifth Avenue Mile in New York on September 22. "It's great to bring this to the U.S., where most people can't really get a chance to see the world class athletes in person, literally for free," he says of the New York race.