Laura Muir: Having that arrogance can propel me right to top 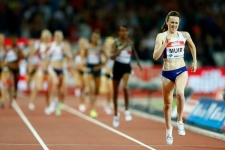 “Each race that I’ve done well in over the last couple of years just boosts that confidence more and more. I’m getting more confident about the way I’m running and how I attack races."

By Jane McLeod, The National

Laura Muir reckons discovering her arrogant streak can help her make up for her Olympic disappointment with a World Championship medal next year.

The 23-year-old capped off a remarkable year on Sunday, when she was named Scotland’s athlete of the year for the second successive time.

The Perthshire racer became just the third British woman to claim a Diamond League title and also broke the 12-year-old UK 1,500m record held by Dame Kelly Holmes in July, before setting an even quicker time a month later.

It is those kind of performances that have finally convinced Muir she belongs in the same field as the world’s best middle-distance runners.

However, her recent achievements have been left tinged with regret after her debut Olympics failed to produce the medal she had been dreaming of.