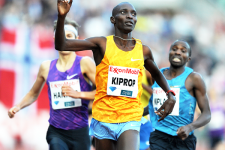 With numerous world records and thrilling races, the Dream Mile is synonymous with the IAAF Diamond League meeting in Oslo

The Dream Mile is synonymous with the IAAF Diamond League meeting in Oslo, and the organisers of the ExxonMobil Bislett Games have announced a star-studded lineup for this year’s race on Thursday, June 9, including Kenya’s world champion Asbel Kiprop.

Kiprop is a multiple winner of the Dream Mile and returns to Oslo with a dual purpose: winning and running a fast time.

He will face opposition from the likes of Djibouti’s Ayanleh Souleiman, who is not only the fastest man in the field with a personal record of 3:47.32 but claimed the world indoor 1000m record during the winter.