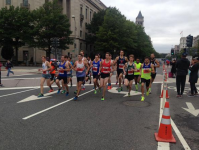 Both champions took home $2500 in prize money for winning the BBTM Featured Event that kicked off the U.S. Navy’s 240th birthday week in nation's capital.

Kenyetta Iyevbele lowered her head and spread her arms out to the side as she crossed the finish line Sunday morning at the inaugural The Navy Mile on Pennsylvania Avenue. Waiting for her as she looked up moments later were several family members rushing over to embrace her for winning the elite women’s division in 4 minutes, 52.34 seconds.

It was Iyevbele’s first road race.

“Probably about three-fourths of the way in I knew I had to pick it up and close in really strong,” Iyevbele said while catching her breath shortly after the race. “I kind of was like, ‘Tuck in and finish really strong.’ ”

Windy and chilly conditions from Hurricane Joaquin contributed to the sparse crowd along the course, which finished between the U.S. Navy Memorial and National Archives building in Northwest, but around 500 total runners in different age groups showed up to compete.