SANTA BARBARA, Calif. – (June 11, 2013) – The inaugural Bring Back the Mile Tour 2013, which features 14 events nationwide and one end-of-the-year gala, has reached the halfway point with plenty of highlights and Mile action. Bring Back the Mile (BBTM), launched in January 2012, is a national campaign to elevate and celebrate the iconic distance.

“To-date, the Bring Back the Mile Tour has generated some thrilling racing and also produced numerous Mile records in several categories,” said BBTM Founder Ryan Lamppa. “Without a doubt, the Tour events have engaged and entertained runners of all ages and abilities, the media, fans and the general public, and we look forward to the second half of the BBTM Tour 2013 and more Mile excitement.” 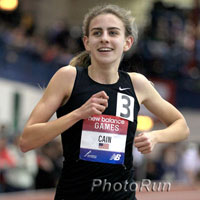 The next stop on the Tour is the Footloose Freedom Mile in Mammoth Lakes, CA on Thursday, July 4. The event is organized by the Mammoth Track Club led by Deena and Andrew Kastor.

Over the past decade-plus, unfortunately, the Mile has lost some of its luster, and thus, the Bring Back the Mile mission is: To return the Mile to prominence on the American sports and cultural landscape by elevating and celebrating the Mile to create a national movement.