BOSTON – The Boston Athletic Association (B.A.A.) has announced a field of world class competitors for the B.A.A. Invitational Mile, to be held on Saturday morning, April 14, two days prior to the 2018 Boston Marathon®. Following the B.A.A. 5K, Canada’s Nicole Sifuentes and American Drew Hunter will lead elite fields at the 10th B.A.A. Invitational Mile. The event will also include Middle School 1K races and Scholastic Mile races featuring youth athletes from the eight cities and towns of the Boston Marathon course.

Returning to the professional race a year after setting a course record is Nicole Sifuentes of Canada. In 2017, Sifuentes clocked an event record 4:33.7 to take the title, finishing a step ahead of Cory McGee. The two-time Olympian returns looking to become the first woman to earn back-to-back race crowns.

For more on the 2018 Boston Marathon weekend, go to: BAA.org 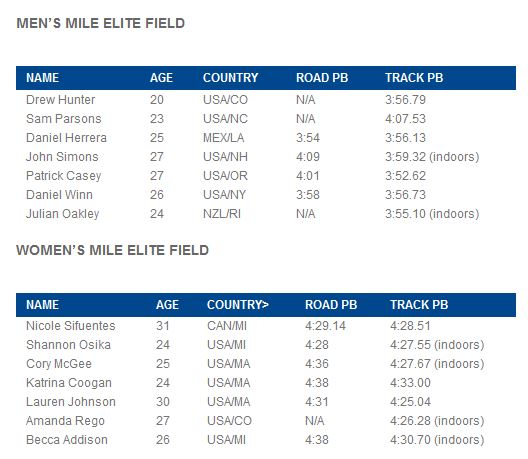