Four-minute Mile battle on in Perth 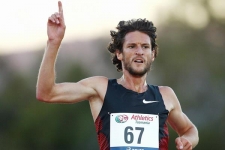 "I like the Mile very much and I think everyone understands the significance of running it in under four minutes."

He's a proud Victorian, but dual Olympian Collis Birmingham is aiming to deliver West Australian fans something special on Saturday night when he competes at the Perth Track Classic.

The four-minute Mile barrier has been broken just four times in Perth, and only twice since Herb Elliott and Merwyn Lincoln achieved the feat in 1958.

Birmingham has a personal record of 3:54.30 in the storied event, and has the chance to notch another sub-4 minute run when he competes on the new track at the WA Athletics Stadium.

But he'll face stiff competition to be the fastest on the night, with three of his rivals also boasting PRs below four minutes.

Kenyan James Magut, whose personal best is 3:50.68, looms as Birmingham's biggest threat, while Ireland's Paul Robinson and NSW's Cameron Page will also be hard to beat.