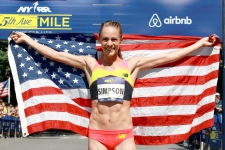 Eighteen Olympians will be in the professional athlete field – 16 of whom competed in the Rio 2016 Games – with two of those athletes having previously won the 5th Avenue Mile, including returning women’s champion Simpson, who with another victory would become the winningest athlete in 5th Avenue Mile history with five titles.

“The New Balance 5th Avenue Mile field will be full of star power, with Jenny aiming to defend her title and become the most iconic athlete in the race’s history, and Matthew looking for another first-place finish after a dream Olympic trip to Rio,” said Peter Ciaccia, president of events for New York Road Runners and race director of the TCS New York City Marathon. “This event will be a fantastic opportunity for these athletes to close out the tremendous seasons they’ve had, and fans everywhere will have the chance to watch them do so on USATF.tv.”