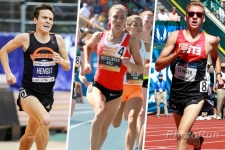 BOSTON — Casey Clinger, Dalton Hengst and Austin Hindman are among the high school middle-distance stars set to compete in the adidas Boys’ Dream Mile, while Taylor Roe, ranked #1 in the U.S., leads a roster for the adidas Girls’ Dream Mile that includes Lexy Halladay, Brie Oakley and Allie Schadler, ranked #2, #3 and #4 in the nation, organizers have announced.

The adidas Boys’ and Girls’ Dream Miles are expected to be among the highlights of the adidas Boost Boston Games / Somerville, set for Dilboy Memorial Stadium on Friday, June 2, beginning at 5:00pm. Tickets, at $10, are available at www.adidasboostboston.com, and will again include a post-race barbecue where fans can get autographs and selfies with world class athletes. The first 1,000 ticket-buyers will also receive a free T-shirt.

Since they began in 2010 as part of the adidas Grand Prix in NYC, the adidas Dream Miles each year have been among the deepest and fastest in the nation. Last year, the Girls’ Dream Mile was switched to a 1500m, and winner Kate Murphy of Lake Braddock, VA, not only qualified for the U.S. Olympic Trials but also ran #1 time in the country for 2016. In 2015, the Boys’ Dream Mile featured five of the six fastest high school times of the year, while the Girls’ Dream Mile produced four of the top five. Perhaps the highlight of the Dream Miles so far has been the victory by Lukas Verzbicas in 2011 in 3:59.71, making him just the fifth U.S. high school athlete to run a sub-4 minute Mile.

In the adidas Boys’ Dream Mile, Casey Clinger (American Fork, UT) is a two-time national cross country champion who finished the season ranked #1 in the U.S. at 1600m indoors, while Dalton Hengst (Owings Mills, MD) is the 2017 Penn Relays Mile winner, the 2017 state champion at 800m, 1600m and 3200m indoors and outdoors, and just last weekend won the Caribbean Scholastic Invitational 1500m in Havana, Cuba. Austin Hindman (Wildwood, MO) is ranked #2 at 3200m, is the 2017 state champion at 800m, 1600m and 3200m, and is the reigning ITU World Junior Champion in the triathlon.

Friday’s Somerville event will be followed on Sunday, June 4, by the adidas Boost Boston Games “street meet” on Charles Street in Boston, to be held on a 200 meter track erected  between the Public Garden and Boston Common. Six Olympic gold medalists—Wayde van Niekerk, Shaunae Miller-Uibo, Tori Bowie, Jeff Henderson, Sally Pearson and Jenn Suhr—are among the stars set for that event, where the adidas Dream 100 will be contested.

The adidas Boost Boston Games, produced by Boston-based Global Athletics & Marketing, Inc., features both a fan-friendly track event in Somerville on Friday, June 2 and, in Boston, a “street meet” on Sunday, June 4. The street meet, which will include highlights of Dilboy action, will be broadcast live on NBCSN on June 4 from 4:00-6:00pm.