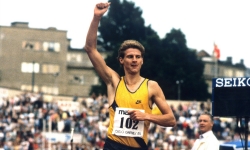 His British record has stood since 1985, but Steve Cram tells AW’s editor he could have run two seconds quicker on that memorable night in Oslo

Of all Steve Cram’s record-breaking achievements, his one Mile performance stands out. At the Bislett Games in Oslo on July 27, 1985, he was the height of his powers. Destroying a world class field that included reigning Olympic 1500m champion and countryman Sebastian Coe, he bounded down the home straight with seemingly an extra gear (53 second last lap, fastest ever for Mile WR!) if he’d needed it and his world record time of 3:46.32 survives as a UK record today.

During an amazing spell of form, Cram – pictured in 1500m action at the 1985 Oslo Games – smashed three world records in 19 days. It began in Nice with a 1500m of 3:29.67 where by his own admission he was holding on in the final stages to snatch a narrow victory over Said Aouita of Morocco. After his Mile record he then ground out a largely solo 2000m effort of 4:51.39 in Budapest. During the Dream Mile in Oslo, though, he finished with such a flourish that he reckons he was capable of maybe two seconds quicker if he’d been really pushed.

Cram, after all, had not even been going for a record of any kind. His only goal that night was to win.