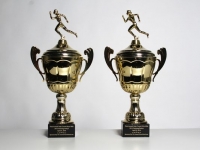 Nearly half a century after he left, he’s remembered not just for winning titles but for changing lives.

The Mile once captured the country’s, if not the world’s, attention and imagination.

So many became legends running it.

Even though he preferred longer distances -- he didn’t even begin running track until his senior year of high school -- Covert clocked 4 minutes, 6 seconds running the Mile in the Marine Corps after college. At that point, that was only six seconds slower than the top time ever run in the world.