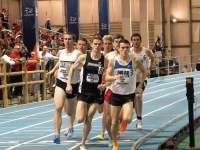 Scottish athlete Chris O'Hare ran the third fastest Mile by a Scot ever a couple of weeks ago, in 3 mins 52.98 seconds which also landed him the collegiate record in USA breaking the previous time set at 3:54.54. O'Hare is attending Tulsa University in America which has seen him develop into one of Britain's brightest young talents.

O'Hare, now 22, finished fourth at the Millrose Games in New York to beat the Scottish indoor record set by David Strang in 1994 (second fastest Britain ever behind all-time great Peter Elliot) and RunnersLife caught up with him to get his thoughts on his current form, his time in America and the dissapointment of missing out on a place in Team GB for the up coming European Indoor Championships.