Catching Up with Jenny Simpson 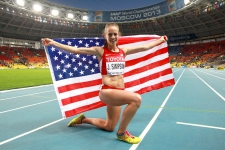 "I think this stretch of American middle-distance and distance success has the potential of being remembered as a great era of our sport."

It's been a wild 2013 season for U.S. middle distance star Jenny Simpson. Switching coaches after a disappointing 2012 Olympic Games, Simpson reunited with her former college coach Mark Wetmore and quickly jumped back on the path to being a challenger for a world title. Focusing on the 1500m most of the season, Simpson charged into the season with a domating performance at the Drake Relays, then came back to win the 5000m at the USA Outdoor Track & Field Championships.

Having won gold at the last IAAF World Championships, Simpson automatically qualified for the 1500m in Moscow. Running strong and confident, Simpson came away with a silver medal, accomplishing her season long goal of coming back to the U.S. with a medal. Wrapping up her season, Simpson trumped strong competition at the NYRR Fifth Avenue Mile, winning by an astounding four seconds with her 4:19.3 clocking (4th fastest woman all-time at the event).

We caught up with Simpson this week, discussing her season, her successes and what lies ahead.

Scott Bush (SB): You put on quite a show in NYC at the Fifth Avenue Mile. Having a chance to reflect on the race, is that how you saw the race unfolding?

Jenny Simpson (JS): I knew from my last few weeks of great training that I was still in shape and would be able to make it a fast race. At the end of my season with all I had been through, I thought my best chance of winning was to make it as simple as possible. Just run hard. I had some formidable competition on the line though, so I knew there was a chance of someone or a small group going with me.

SB: It has to feel good to end your season with a win, right?

JS: Of course! After my last race, it's a long haul of training before I get to race on the track again. During that time it is nice to be reflecting on something fun and victorious rather than being fueled by disappointment. Every athlete is encouraged and motivated differently and for me, having the memory of a good final race is great motivation.