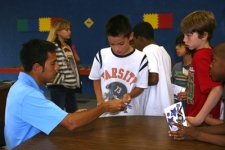 MARBLE FALLS, Texas — The chants of “Leo! Leo! Leo!” brought a grin the size of Texas to the face of U.S. Olympian and middle-distance runner Leonel Manzano.

It happened after the former Granite Shoals resident spoke to 96 children at the Boys & Girls Club of the Highland Lakes, Marble Falls Unit, March 15.

He signed an autograph for everyone who wanted one and posed for a picture in front of the banner the children made for him.

The inspirational chants came at a great time, he said, because he is training for the U.S. Olympic Trials with the aim of qualifying for the Olympic team for the second consecutive time.