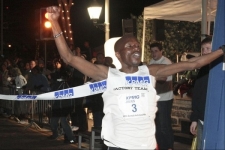 By Stephen Wright, The Royal Gazette

But despite clocking the quickest elite men’s time in recent memory, Bor, whose brother Emmanuel came eighth, admitted he was slightly disappointed he didn’t run even faster.

“I thought I was going to run under four minutes and was confident of a fast time,” said the former University of Alabama student. “But coming back (at the half-way stage) I saw it was 2.04 and then I just came for a win.