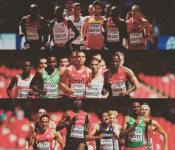 Team USA once again looked strong in the first round of the 1500 as Matthew Centrowitz, Leo Manzano and Robby Andrews all advanced to Friday’s semifinals.

Day 6 of the 2015 IAAF World Championships in Beijing began in a very similar fashion to Day 5 for Team USA’s distance squad. Yesterday, the men’s 5000 runners cruised through their prelims to advance to Saturday’s final while the women’s 800 runners didn’t have it as easy, as Molly Ludlow and Brenda Martinez had to sweat it out and Alysia Montano went home after falling with 200 meters to go.

The men once again looked strong today in the first round of the 1500 as Matthew Centrowitz, Leo Manzano and Robby Andrews all advanced to Friday’s semifinals. The women’s 5000 was a different story as only U.S. champ Nicole Tully made it through to the final, doing so as the fourth of five time qualifiers. Marielle Hall and Abbey D’Agostino both struggled and finished 10th and 12th in their heat, respectively.

Looking at the big picture, the most notable story from this morning’s session was the DNF of World Indoor champ Ayanleh Souleiman in the 1500. Souleiman had scratched from the 800 earlier in the meet and now we know why: he was dealing with an injury, and though he gave it a go today, he pulled up lame with about 480 to go in his heat and won’t be running in the semifinals tomorrow night. It’s sad to see a medal favorite go home because his body betrayed him, but the 1500 is so loaded that Sunday’s final is still a must-see event.