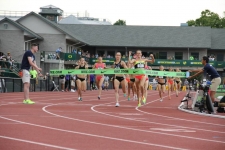 Never before have there been more than a dozen American women competing at the same time who are hovering around the 4-minute mark for 1500 meters.

By Sarah Barker, Outside

American marathoners are floundering. While Kenyan and Ethiopian runners regularly sweep the top 10 spots at major events, for the past three decades, U.S. women haven't had the same depth. In recent World Marathon Majors, the U.S. placed just two women in the top ten at 2014 NYC Marathon; two in the top ten at 2015 Boston; and none in the top ten at the 2015 London Marathon. But our middle distance ladies are kicking ass—and it’s no coincidence. Here’s a look into why.

#1 Mid-Distance Domination
First, let’s see what’s happing in middle-distance races. Never before have there been more than a dozen American women competing at the same time who’ve run two minutes and faster for 800 meters, and hover around the 4-minute mark for 1500 meters. These are benchmarks for global competitiveness, and there’s a flying squadron of maybe 20 contenders ready to take on the world.

Jenny Simpson, for example, won a silver medal in the 1500 at the 2013 World Championships; Brenda Martinez took bronze in the 800 at that same competition; Chanelle Price won 800m gold in the 2014 Indoor World Championships; and (I get emotional just writing it) last summer, 19-year-old Ajee Wilson ran down world champion Kenyan Eunice Sum to win a Diamond League 800 meters in 1:57.67, a clocking that led the world at that time.