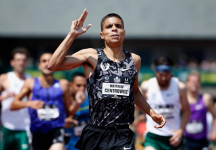 "Matthew's most important goals are to win global medals. He's mixing it up with the best guys in the world and the next step is to win one of these major international meets."

Matthew Centrowitz showed quite clearly at last weekend's USA Track & Field Championships that he is currently this country's top Olympic hopeful in the men's 1500 meter run.

Centrowitz sat comfortably in fourth place for the better part of two laps while Ben Blankenship set a moderate pace. Seeing the field was not separating and not wanting to risk a crowded sprint to the finish, the Broadneck High graduate made his move at 600 meters.

Centrowitz moved quickly to the front of the pack and picked up the tempo just enough to put stress on the trailing runners. When the bell rang for the final lap, the Arnold native found another gear to literally run away with his third national title in the event.