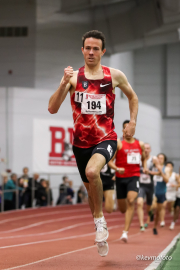 In February 2016, Josh became the first Nevada native to run a Mile in under 4 minutes, clocking 3:58.33 indoors at the University of Washington’s Husky Classic.

FUN FACT: He was also a member of the state championship basketball team, and at 5'9", could dunk the basketball.

By Jess Whittington for World Athletics

Great Britain’s Jake Wightman stunned the Olympic champion, the defending world champion and himself at the World...

FALMOUTH, Mass. – On a picture perfect Saturday evening on Cape Cod, Josh Thompson and Cory McGee kicked their way to victories in the...

Meet The Most Interesting Man in NCAA Running: Josh Thompson

When the Oklahoma State men tied the #3 time in NCAA history in the distance medley relay at Saturday’s Alex Wilson Invitational at Notre Dame, they did so not...

A Moapa Valley High School alumnus and track star recently became the first athlete ever from the state of Nevada to run a Mile in under 4 minutes.