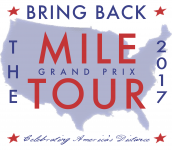 SANTA BARBARA, Calif. – Bring Back the Mile, the national campaign to elevate & celebrate the storied distance, has announced the 4th edition of its grand prix tour that showcases 5 marquee events from across the country. The Bring Back the Mile Grand Prix Tour 2017, with more than $110,000 in guaranteed prize money, opens at the Grand Blue Mile in Des Moines, Iowa on Tuesday, April 25. The BBTM GP Tour 2016 titles were won by Riley Masters and Heather Kampf who three-peated.