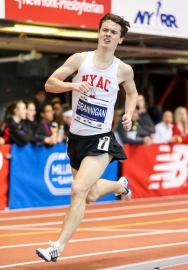 Mikey Brannigan, a rising, inspiring Mile star, won the 1500 meter gold medal at the Rio 2016 Paralympic Games. At the 2016 Sir Walter Miler, he clocked a 3:57.58 to smash his previous personal record by more than 5 seconds. In doing so, Brannigan, who is on the autism spectrum, became the first person with a T20 Paralympic classification, which refers to intellectual disability, to break the coveted 4 minute mark.

For 2017, Mikey was named Team USA's Male Paralympic Athlete of the Year.

2017 USA Paralympic Athlete of the Year and 2016 Paralympic Champion at 800m and 1500m to debut in a USA Championship at the Grand Blue Mile; first sub-4 Miler with autism

The USATF 1 Mile Road Championship returns to Des Moines for the second consecutive...

Making the Most of Your Mile: 2018 Grand Blue Mile

The USATF 1 Mile Road Championship returns to Des Moines for the second...

The first person with autism to break 4 minutes in the Mile shows no signs of stopping.

He’s been profiled on ESPN, on NBC News, and in the Wall Street Journal in the last year alone. But perhaps the apogee of Mikey Brannigan’s career came in September, when he...

The teen runner with autism won the 1500 meters after leading the entire race in Rio de Janeiro.

Mikey Brannigan topped off a stellar 2016 track season on Tuesday with a Paralympic gold medal in the 1500 meters in Rio, where he led the race from beginning to...

Mikey Brannigan: Running for Gold at the Rio Paralympics

"Mikey wants to inspire all kids to participate in any athletic sport, and wants to continue to be a role model for other people with autism—to show them that there are no limits.”

His Facebook page is filled with photos from graduation, the beach and...

Brannigan, who was diagnosed with Autism when he was 18 months old, owns a personal best of 4:03.18 for the Mile.

Brannigan, who was diagnosed with Autism when he was 18...

The 17-year-old junior from Northport, N.Y., diagnosed with autism as a toddler, is qualified for the New Balance Boys...