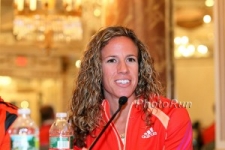 Two more core members of the California-based Mammoth Track Club have announced plans to take their running career elsewhere. Morgan Uceny, ranked #1 in the world in the 1500 meter run in 2011, and 2008 Olympian Anna Pierce will follow their coach, Terrence Mahon, who has taken a job with UK Athletics, to England.

Uceny has posted on Facebook, "In case you haven’t heard the BIG news, I’m moving to England at the end of the month! My coach is the new UKA middle distance coach and I wasn’t about to give up on someone who has taken me as far as I’ve come. Cheerio!”