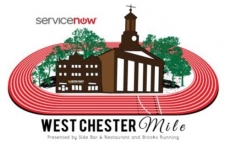 What began as the Boxcar Mile in 2015 with a not-so-modest $8000 in prize money in its first year has grown up quickly. The 2016 ServiceNow West Chester Mile has been the latest event to capitalize on and help foster opportunities for Americans to race on home soil during the summer. An event record $15,000 prize purse is welcoming some of the top Milers in the U.S. including HOKA ONE ONE's Leo Manzano and defending champion Jack Bolas of the NJ*NY Track Club on the men's side as well as Lauren Johnson fresh off a 4:25.04 personal record at the Sir Walter Miler a couple of days ago and defending champion, Under Armour's Rachel Schneider.

The third of six stops on the BBTM GP Tour 2016, the ServiceNow West Chester Mile also includes community Miles, which event director Kevin Kelly mentioned has grown a lot and will feature more than 200 Milers of all ages and abilities. If you're in the area, head on out to Henderson High School West Chester, PA for a unique opportunity. Fans everywhere can also participate in the BBTM Pick-the-Winner contest presented by Running Warehouse to win some great swag.

Elite Miles begin at 8:00pm and will be streamed live on FloTrackPRO