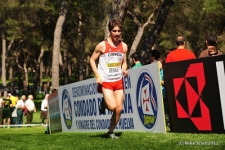 Rob Denault, who competes for the Villanova University Wildcats just wrapped up his 2013 indoor track season by acheiving one of his primary goals. That goal was to run a sub-four minute Mile at an indoor meet. He did so by running just under the benchmark of 3:59.39 as a freshman at the Alex Wilson Invitational at Loftus Sports Center on Saturday, March 2nd.

Denault earned All-Mid Atlantic Region honours and helped Villanova receive an automatic bid to the NCAA Championships by finishing 19th overall at the NCAA Mid-Atlantic Regional. He crossed the finish line in that race in 30:54 and was the Wildcats fifth counting runner. He also finished in the team's top five at all five scored meets during the cross-country season and placed second on the team and 53rd overall at the Pre-NCAA meet with a collegiate-best 8K time of 24:04.7.