Rise Up: 5 Questions with Morgan Uceny 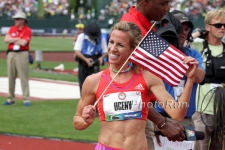 At the U.S. Olympic Trials in June, Morgan Uceny cemented her status as the best 1500 meter runner in the United States, winning the event in 4:04.59 to qualify for her first Olympic team. At the Games in London, however, tragedy struck Uceny for the second straight year in the final of major championship, as she was tripped with one lap to go, falling to the track and ending all hopes of securing a medal. The same thing happened to Uceny at last summer’s World Championships in Daegu, South Korea, leaving a large dark spot on an otherwise successful season in which she finished as the number one ranked 1500m runner in the world.

We recently caught up with Uceny, an adidas-sponsored athlete who is coached by Terrence Mahon of the Mammoth Track Club, and asked her about the Olympics, her current training and future goals.