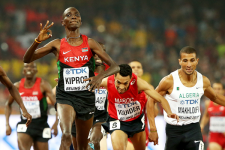 Asbel Kiprop has won four major titles at 1500 meters but his victory in Beijing two years ago was arguably the most impressive of the lot as he had to extricate himself from a seemingly impossible position on the last lap and overtake nine runners in the last 300 meters to ensure his third world title.

A fourth world title in London would match the haul achieved by world record holder Hicham El Guerrouj from Morocco between 1997 and 2003. But while El Guerrouj could often rely on a teammate to ensure a fast pace to his liking, Kiprop has three younger teammates – not to mention some very capable challengers from the rest of the world – all looking to knock the reigning champion off his pedestal.

Kiprop has been in indifferent form in the lead-up to the London 2017 World Championships. Most recently, he was a well-beaten 11th at the IAAF Diamond League meeting in Monaco in 3:34.91, but experience and a cool head – which Kiprop demonstrated after getting boxed on the last lap in Beijing – are what is important in a championship setting.