Laura Muir is on fire 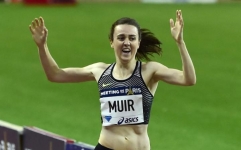 "Paula Radcliffe, Steve Cram, Seb Coe and Kelly Holmes have all been British distance runners that I have admired.”

Scotland’s Laura Muir is on fire.

After finishing in a disappointing seventh place during the Rio Olympic 1500 meter final, she went to Paris to compete in the Diamond League at the Stade de France on August 27. In La Ville Lumière she raced to a new British record time of 3:55.22, it was a brilliant performance.

She sat in third place for the first 1050 meters of the race and then lit up the final 450 meters to win in convincing fashion. Her performance is a meet record and the world lead.

Muir captured the 2016 Diamond League title by finishing second in the 1500m at the Zurich track meet. She was pipped at the line by American Shannon Rowbury. The third place finisher was Sifan Hassan of the Netherlands. For the Diamond League win Muir earned $40,000.