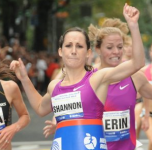 The 2008 Olympian proves that constant goal setting is a sure path through injury.
By Jon Gugala, Competitor Magazine

One of Shannon Rowbury’s competitors said it best: “She just can’t believe that she’s not a better athlete than every other girl out there.”

That competitor, who will remain nameless, was speaking about last year’s USA Track & Field Outdoor Championships in Eugene, Oregon, where Rowbury, who had only been training for six weeks after recovering from the dual Achilles injuries that sidelined her for much of the previous two seasons, snatched a world championships team berth in the 1,500 meters with a third-place finish. In the final in Eugene, Rowbury beat women who, on paper, should have been shoo-ins for the U.S. team, but the fiercely competitive, goal-oriented native of San Francisco was determined to make the team and launch herself back into the ranks of the world’s elite.

Read the complete article at Competitor.com