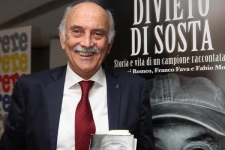 By Diego Sampaolo for the IAAF

Several past Italian and International running legends gathered in Milan on October 18th for the launch of the book Divieto di Sosta (Do Not Stop), the biography of Italy’s middle distance great Franco Arese.

Arese won the 1971 European 1500 meter title in Helsinki and held Italian National records at all middle distances from 800m to 10,000m before working as President of the Italian Athletics Federation FIDAL from 2004 to 2012 and of ASICS Europe for 31 years until 2013. Arese is now President of Karhu, a Finnish company specialising in running and ski apparel.

The fascinating which looks back into the life of Arese, was written by three of Italy’s foremost athletics writers: Gianni Romeo, Franco Fava and Fabio Monti. The first part of the book, written by Romeo, fosuces on Arese’s childood and the start of his running career in his native region of Piedmont.