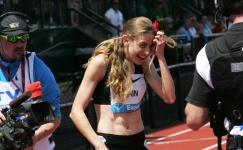 His cell phone rang. It was his father — Mary’s grandfather — calling from New York.

People all across the country were saying that all weekend.

Mary Cain's father, who works across the street from The Armory at New York-Presbyterian Hospital, is becoming well-versed in the world of elite track and field while also being a careful parent.

"It's my job to help her maintain perspective and keep her grounded," he said.

Not an easy task. Mary Cain has become a streaking comet in U.S. track and field in 2013 with a string of national high school records that began with the New Balance Games Mile on the Armory track in January.