The Second Fastest Ever

"I'd like to see the world record come back to the U.S., but you know everything has to be just right and that doesn't happen too often."

Setting up world record attempts in the Mile run is like handling butterflies. The slightest miscalculation, one clumsy move, and oops! Maybe a busted butterfly, but no busted record. And so it seemed at last week's Compton Invitational Track Meet in the Los Angeles Coliseum, where a carefully prepared attempt at Frenchman Michel Jazy's Mile mark of 3:53.6 was foundering on a soft track and a slow early pace. Yet here came 19-year-old Jim Ryun, his hot-pink shorts and his pale-blue jersey glowing in the lights, his long legs reaching out as he hurtled like a sprinter through the final 220 yards. The timers' watches ticked on—3:53.4, 3:53.5, 3:53.6, 3:53.7—and then Ryun was through the tape. Not a world record, but easily a new American one; not a world record, but the second fastest Mile ever run; not a world record, but the bright promise of a series of them to come.

Ryun was both amazed and chagrined when he heard the winning time. "I thought I'd done about 3:56," he said. "I felt so strong at the end. That really ticks me off. If I'd missed by half a second, well, that might have been all right. But to come so close and not even know I was doing it."

All week Jim Ryun had known what he was going to try to do. His coach at the University of Kansas, Bob Timmons, had called ahead from Lawrence to announce to meet officials that he felt Jim was ready for a shot at the world record. What Timmons and Ryun needed was someone to carry the field to a three-quarter time of 2:56.

"It's not so much that I need the psychological lift of being able to float along behind somebody," Ryun explained on the eve of the race. "It's just that I don't have too good a sense of pace. I'm liable to blast out the first quarter in 54 seconds and not have much left for the rest of the race. I did that indoors in New York one night. I had to work hard in the last quarter."

Well, runners who can belt out 2:56 times for the three-quarter mile are not exactly a dime a dozen, but meet officials thought they had a couple who would try. One of them was a long-tressed Englishman from Birmingham, 25-year-old Neill Duggan, a freshman at Allan Hancock College in Santa Maria, Calif. The other was the experienced George Young, who is a member, with Ryun, of the Church of Christ; although primarily a steeplechaser, he was willing to oblige. George, however, grew testy about his assignment when word got out that that was all he was to do.

"I don't like people to think that I'm just out there to set a fast early pace," he said as he loosened up with a jog around Lafayette Park across from his hotel the morning of the race. "But I can set a fast enough one to give somebody a world record. That's all that anyone wants from me, anyway. No one cares what I do after that."

Young downgraded himself more than he needed to. The people producing the Compton Invitational were used to extraordinary performances, and historically they have appreciated help from bit players who added to the luster of their meet, where 25 sub-4 minute Mile performances had been run in 11 years. One bit player in 1964 was 17-year-old Jim Ryun. He finished eighth in a race in which Oregon's bony Dyrol Burleson outkicked Chicago's red-haired Tom O'Hara to win in 3:57.4. Ryun, only a junior at Wichita's East High School, clocked 3:59 and became the first high school runner to get under 4 minutes. 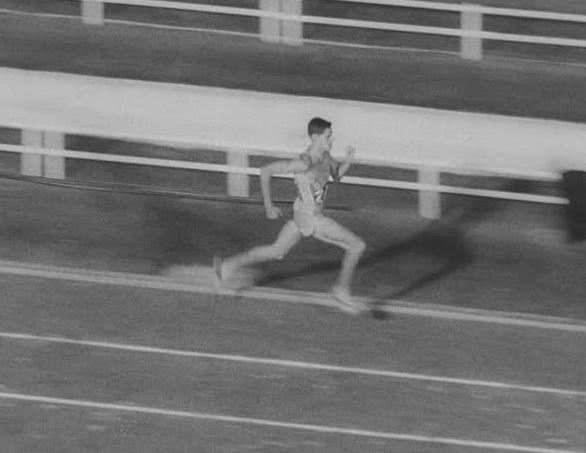