The Curiously Elastic Limits of Endurance 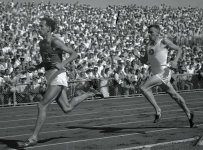 And there’s more to Landy’s sudden breakthrough, after being stuck for so many races, than simple mind over muscle.

By Alex Hutchinson, Outside Magazine

On a frigid Saturday night in the university town of Sherbrooke, Quebec, in February 1996, I was pondering—yet again—one of the great enigmas of endurance: John Landy. The stocky Australian is one of the most famous bridesmaids in sport, the second man in history to run a sub-4 minute Mile. In the spring of 1954, after years of concerted effort, centuries of timed races, millennia of evolution, Roger Bannister beat him to it by just 46 days.

The enduring image of Landy, immortalized in countless posters and a larger-than-life bronze statue in Vancouver, British Columbia, comes from later that summer, at the Empire Games, when the world’s only 4 minute Milers clashed head-to-head for the first and only time. Having led the entire race, Landy glanced over his left shoulder as he entered the final straightaway—just as Bannister edged past on his right. That split-second tableau of defeat confirmed him as, in the words of a British newspaper headline, the quintessential “nearly man.”

But Landy’s enigma isn’t that he wasn’t quite good enough. It’s that he clearly was. In pursuit of the record, he had run 4:02 on six different occasions and eventually declared, “Frankly, I think the 4 minute Mile is beyond my capabilities. Two seconds may not sound much, but to me it’s like trying to break through a brick wall.” Then, less than two months after Bannister blazed the trail, Landy ran 3:57.9 (his official mark in the record books is 3:58.0, since times were rounded to the nearest fifth of a second in that era), cleaving almost four seconds off his previous best and finishing 15 yards ahead of a 4 minute pace—a puzzlingly rapid, and bittersweet, transformation.

Like many Milers before me and since, I was a Bannister disciple, with a creased and nearly memorized copy of his autobiography in permanent residence on my bedside table, but in that winter of 1996, I was seeing more and more Landy when I looked in the mirror. Since the age of 15, I’d been pursuing my own, lesser 4 minute barrier—for 1500 meters or metric Mile, a race that’s about 17 seconds shorter than a Mile. I ran 4:02 in high school, and then, like Landy, hit a wall, running similar times again and again over the next four years. Now, as a 20-year-old junior at McGill University, I was starting to face the possibility that I’d squeezed out every second my body had to offer. During the long bus ride from Montreal to Sherbrooke, where my teammates and I were headed for a meaningless early season race on one of the slowest tracks in Canada, I remember staring out the window into the swirling snow and wondering if my long-sought moment of Landyesque transformation would ever arrive.

To break 4 minutes, I would need to execute a perfectly calibrated run, pacing each lap just two-tenths of a second faster than my best time of 4:01.7. Sherbrooke, with its amusement-park track and an absence of good competition, was not the place for this supreme effort, I decided. Instead, I would run as easily as possible and save my energy for the following week. Then, in the race before mine, I watched my teammate Tambra Dunn sprint fearlessly to an enormous early lead in the women’s 1500, click off lap after metronomic lap all alone, and finish with a scorching personal best time that qualified her for the national collegiate championships. Suddenly my obsessive calculating and endless strategizing seemed ridiculous and overwrought. I was here to run a race; why not just run as hard as I could?