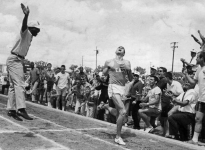 A half-century after a Kansas high schooler ran the Mile in under 4:00, a select five U.S. boys have joined the sub-4 club with Jim Ryun

On Monday I called Jim Ryun, thinking it would be cool to tell the greatest Miler in American history something he might not know about the Mile: Last weekend, a high school student named Matthew Maton ran it in 3:59.38.

But Ryun was way ahead of me, having heard that news within minutes of it happening. “That makes six of us,” Ryun said, referring to the number of American high school students who have run the Mile under 4 minutes.

It was 50 years ago Friday that Ryun broke the tape in 3:58.3 at a Kansas high school track meet in Wichita, his hometown. Yet it does Ryun little justice to note that only five other high school runners have reached that goal in a half-century. Of those five, four did so at non-high-school events, meaning they benefited from older and often-faster competition. In breaking 4 minutes last Friday night, for instance, Maton finished third behind two University of Oregon runners. The fifth student to break four, Lukas Verzbicas, ran 3:59.71 at the 2011 adidas Dream Mile, an annual competition between the nation’s fastest high school Milers.