Shannon Rowbury — Not Fade Away 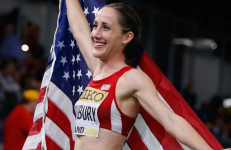 “Three Olympic teams is already above and beyond. A fourth is like a cherry on top. I want to make that team because I think I can and I’ve worked for it.”

“As soon as she came into the world, running would never come first.” So Shannon Rowbury describes the transformation that came over her with the arrival of her daughter, Sienna, in 2018.

Yet if anyone thinks the 3-time Olympic 1500 finalist, now 36, is any less of a racer as a mother, they weren’t paying attention to her 2020 season.

“When the pandemic first hit,” the Duke grad says, “there was this limbo. I had to do all my training alone, and then there were still about a couple of weeks where it looked like maybe the Olympics would happen. And that was like, ‘OK, head down, just grind it out, whatever you have to do.’ Then once the Olympics were postponed, it all became real.

“So really having to adjust my training significantly from about March until June, I wasn’t on a track, I just did fartlek. So, when I look at the results that I ultimately had, I wanted quicker because I’m competitive like that. And, you know, you’re always driven to try to PR or come close to a PR. However, when I think about the context and the sort of highly disjointed training and lead up that I had had, I’m extremely proud of my ability to run compelling times despite the circumstances.”

The inspired racing didn’t happen despite being a mother — it happened because of it, Rowbury explains. “It’s given me a new perspective: there’s certain things that I experienced during my running career that felt wrong or were painful or challenging, but in my brain it was, ‘OK, I’m tough enough. I can take this. It’s fine. This is the price I have to pay to be an athlete at the highest level.’

“Now as a mother, looking back on those experiences, I’m imagining what if that had been my daughter Sienna and unequivocally saying I would never let her be treated that way.

“So that’s really created a motivation for me to continue the work that I’ve done in trying to improve the sporting world to be a more equitable place and to be one that’s more welcoming to a woman athlete’s experience and more inclusive than it has been. That’s given me a different kind of motivation. I want to be successful; I want to set an example for her. I want to show her the challenges and the joys of pursuing a multi-faceted life.

“Really, that motivation to make the world better if and where I can really was crystallized through her coming into my life.”

One offshoot of this evolution came over the winter, when Rowbury took a part-time role at a startup called Parity, which, she says, “is working to create more sponsorship opportunities for women athletes.”