My favorite sporting moment: When Marcus O’Sullivan ripped up the boards at the Garden 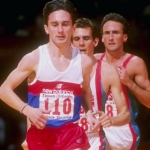 It was one of the greatest highlights and inspiring moments of my first year at Villanova, definitely one of those moments where you get that feeling if you see it, you can be it.

In the winter of 1988 I’d just turned 18-years-old and had been at Villanova University for about six months. Only I wasn’t running much during that time, because of injury. The cross country season had come and gone and now it looked like the indoor season would too.

At that stage of my career I’d never actually raced indoors before, my only experience of it coming from the TV back home in Cobh. Especially those images of Eamonn Coghlan, ripping up the boards at Madison Square Garden in New York, his Discover Ireland singlet first across the line at the Millrose Games.

Eamonn was the Chairman of the Boards, had won the famed Wanamaker Mile a record seven times, most recently in 1987, although he was beaten the year before that by Marcus O’Sullivan.

By then, Marcus was already a bit of a hero to me. He’d won the first of three World Indoor 1500m titles in 1987, and he was from Cork, and he had a nice surname. When I first visited Villanova, around Easter of 1987, it was Marcus who showed me around beyond the campus, and convinced me this was the place to come, how the experience had stood to him.

It was a Friday afternoon, February 5th, 1988, when a group of us athletes from the Villanova track team decided to drive up to New York and catch the Millrose Games live and in person. Villanova was just under two hours from the City, so if we headed off after lunch we would get there in plenty time, and could drive back home again afterwards.

As a wide-eyed and still green 18-year-old, I jumped at the opportunity. Up to this point the only proper international athletics meeting I’d ever been to was the Cork City Sports, much closer to home. There was something properly mystical too about the Millrose Games at Madison Square Garden. The old wooden track, 11 laps to the Mile, and just four lanes painted bright yellow and orange. A tight track, with tight bends, and a small select field.

On this night Marcus was down to run the Wanamaker Mile again, and we also had our Villanova teammate Vicki Huber in the women’s Mile, plus two Villanova relay teams.

It was a nice distraction from being injured and unable to train and race, a way to feel connected to go along and support our teammates and catch a glimpse of Marcus, our reigning World Indoor champion who lived just up the road from Villanova. Even though I’d met him a few times I was still in awe of him every time he raced.

To me Marcus was still in that category of people that you got nervous and shy around, or if you crossed paths in the park you’d get an extra spring in your step for the rest of the run. Marcus was out there running around just like I was. He was living the dream I was still dreaming about.

The Garden was packed to the rafters, and we were like the orchestra somewhere underneath the stage in the pits of a Broadway Show. We must have been given an extra athlete’s pass, because I remember watching the athletes warming up beforehand on just concrete floors, like an indoor car park. The glitz and glamour was all out on the track, just like the Broadway stage.

We hurried out to watch the Villanova two-mile relay team win their race and run a lap around the track together after. How I wished I could be on the team and run on this stage. The entire place felt so full of energy, and what would it be like to run on the steep wooden boards? It didn’t make sense to wear spikes on such a hard surface, but the specially made rubber sole shoes and short spikes gave the perfect grip for athletes travelling at such speed on the tightest of bends.

Where we stood on the concrete floor, the track came right up to your chest and you could actually lean onto the top of it, right on the edge of lane four when the distance races were taking place.

People were banging the boards with their hands which added to the noise generated by the clatter of spikes on the wooden track, and what seemed more staccato than smooth running. Racing indoors, the athlete has to think and act so much more strategically than on an outdoor 400 meter track. It was all about balancing the expenditure of energy on the wooden boards that didn’t give a whole lot back to the runner.

This was the best spot to watch the races, where you could feel the track creaking as the runners ran past and over such a short lap. You didn’t have to wait long for the runners to be back around again.