From Desk Jockey to World Record Holder at 65 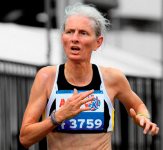 At age 51, Sabra Harvey was a graphic designer who spent long days in front of a computer. Work friends got her up and moving—and ultimately setting Masters records. In those days, Harvey, 5-foot-8, wasn’t in good shape. “Working full-time sitting at a computer all day, I was up to about 160 pounds,” she says. “That’s not heavy, although it’s not light, either.”

Harvey took her first steps toward running in 2000, when she participated with a group of women co-workers in the Dogwood Half Hundred. The 50K competitive endurance hike follows a grueling route in Virginia’s George Washington National Forest. “We had so much fun,” Harvey says of the long day in the mountains.

The next undertaking for the women? Continuous running: a 5K. “My response was, ‘You gotta be kidding me,’” Harvey says. “I had a lot of doubt about even finishing.” She thinks she ran 31 or 32 minutes.