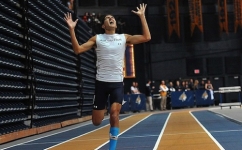 The Montana State University senior burst onto the scene with a 3:55.27 Mile.

Cristian Soratos of Montana State University wasn’t surprised when ran a 3:55.27 Mile at the University of Washington on Feb. 14, his first time under 4:00.

Some fans of the sport were skeptical, however. After that race, “people were really raising their eyebrows at Cristian’s converted time, which is fine,” MSU coach Lyle Weese says. “People can have their opinions.”