This is it. The final Diamond League meeting before the 2015 IAAF World Championships is upon us, and it will take place on Thursday in Stockholm’s Olympic Stadium. With the Kenyan World Championships trials taking place this weekend, the distance fields aren’t as strong as usual, but there are still plenty of big names looking to get in one final effort before Worlds. Matthew Centrowitz and Ayanleh Souleiman will battle over 1500 meters; Molly Huddle looks to earn her first Diamond League victory in the 3000 after coming up short in London; Brenda Martinez tries to get on back on track in the 800.

In non-distance action, U.S. champ Marquis Dendy goes for his second win in as many weeks in the long jump, Pan Am champ David Oliver squares off against London winner Pascal Martinot-Lagarde in the 110 hurdles and world champ Shelly-Ann Fraser-Pryce takes on Tori Bowie in the women’s 100.

We present the meet details below, followed by previews of the mid-d/distance events.

How to watch: Live on beIN Sports from 2:00 p.m. ET to 4:00 p.m. ET. In Europe, you can watch the meet live on Eurosport. Details on the TV/streaming information here. 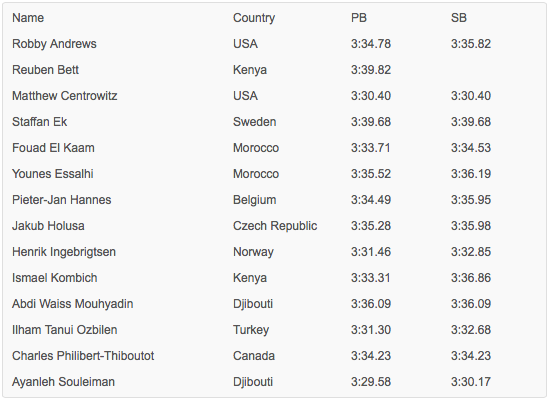