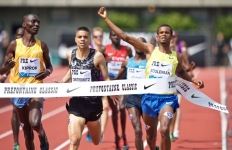 Ayanleh Souleiman fought off a kicking Matthew Centrowitz Saturday on the home straight before a roaring crowd at Hayward Field to win the Bowerman Mile, as the Prefontaine Classic closed in style.

Centrowitz, who starred for the University of Oregon, brought the crowd of 13,278 to its feet by going for the win coming off the Bowerman Curve and onto the home straight.