A Mile and Change 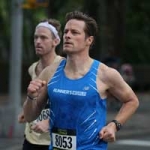 Running at the edge of your ability in a marathon feels like you will run out of gas; in the Mile, it feels like you’ll combust. The pain is more jagged.

Earlier this year, I came out of my winter running hiatus thinking about a new goal. Feeling a bit burned out by half- and full marathon training, I recalled a terrific piece we’d published last year, “The Mulligan Mile.” Amid a disintegrating marriage, the author, Louis Cinquino, set out to run a 5 minute Mile at age 50, a mark he very nearly hit as a high-schooler. Huh. The Mile.

The fastest one I ever ran was a 5:31, when I was 26 and doing weekly speed workouts with the New York Road Runners Club to prepare for the 1994 New York City Marathon. We ran Mile repeats around the Great Lawn in Central Park on Thursday nights, hard against the glowing midtown skyline. It was beautiful and awful all at once. When I think about that 5:31, I can almost taste a metallic tang in my mouth. It was the closest I’ve ever come to vomiting because of exercise. But two decades later, at 46, I decided to see if I could run a hair faster. A 5:30. It would be a reach, but this year—the 60th anniversary of Roger Bannister’s first sub-4 Mile and the 50th anniversary of Jim Ryun’s first sub-4 high school Mile—seemed like the right time to try.

Plus, the Mile is making a comeback. It’s been a long time since the distance has really mattered in our sporting landscape (track & field events, of course, now feature the slightly shorter 1500 meters), but since 1999 the number of one-Mile road races in America has more than doubled to 700, according to Bring Back the Mile, which put together a grand prix tour this year, awarding almost $100,000 in prize money. The Fifth Avenue Mile in New York City began in 1981 with 52 runners. This year, more than 5,600 people finished. Perhaps best of all, running just one Mile may do the most good for the greatest number of people. New research shows that short, intense exercise may offer better health benefits than higher mileage provides. And the Mile is a gateway. “Most people can’t or won’t do a 5K, let alone a marathon,” says Ryan Lamppa, founder of BBTM. “But most people can do four laps on a track. This is the ideal distance for getting sedentary people of all ages off the couch and out the door.”