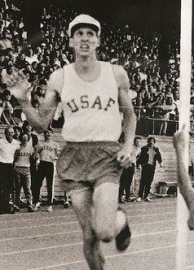 In 1973, Wottle and 1972 U.S. Olympic teammate and 5000m specialist Steve Prefontaine raced the Mile at the - and Wottle kicked down Pre on his home track, clocking 3:53.3 to 3:54.6; both set personal records, and at the time, the legendary duo became the 3rd and 9th fastest men all-time in the Mile.

In June 2012, he retired from Rhodes College in Memphis where he was the long-time Dean of Admissions.

FUN FACT: After his epic 1973 Mile race with Steve Prefontaine, Wottle had put his trademark golf hat on the Hayward Field infield and somebody picked it up and took off, but Wottle chased the thief out of the stadium and eventually got his beloved, lucky hat back.

I first met Dave Wottle as a 15-year-old making a trip to the Ohio JC Summer State Meet in Canton, Ohio. I had qualified for the event with my...

Rick Schnittker, a BBTM supporter and Bowling Green alum, was inducted into the Perrysburg Schools' Hall of Fame for his track exploits during 1967-70 track seasons. His school Mile record of 4:16.4, which had been forgotten in the switch to the 1600m, was reinstated by Thomas Hosler,...

"Hands down I always preferred running the 1500 meters and the Mile...I loved the Mile, its strategy and the balance between speed and endurance."

Some Hot Times in a Hothouse

As track meets go the 52nd NCAA Championships at Baton Rouge last week was certain to generate a bunch of new records. Not so much for athletic...