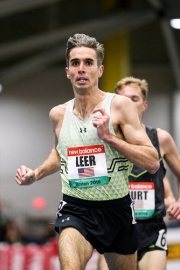 Leer is a four-time NCAA Division III national champion including two Indoor Mile titles (2006-07), and the Minnesota native is the only Division III athlete to win both the 1500 meters and 5000 meters, which he accomplished at the 2007 Outdoor National Championships.

FUN FACT: In October 2016, Will married 2016 Olympian Aisha Praught who sports a 4:26.14 Mile PR, and together, they are the second fastest married couple for the Mile!

5 Steps to Running Your Fastest Mile

U.S. champ Miler Will Leer leads the way to your next PR

By Martin Fritz Huber, Outside Magazine

"There is nothing like standing on the start line of the 1500 meters. It always will be the blue ribbon event. It is the last day. The stadium is full. Everybody is watching. You feel like a...

Minnetonka native outrunning Father Time and everyone else

At 29, Will Leer is running better than ever and making a stop in his home state.

The Fu Manchu mustache has been around for several years now, long enough to become Will Leer’s signature look. The prodigious beard is a new addition to the Minnetonka native’s...

Does the Mile still matter?

Nick Willis: "It is important for the casual fan because people understand a sub-4 minute Mile. A 3:38 1500m doesn’t mean anything to most people."

SPIKES sat down with two of the world's top Milers Nick Willis and Will Leer and Mile legend John Walker to find out why they...

By Liam Boylan-Pett, from Running Times

The Year of Leer?

Is it the six weeks at altitude? Is it the introduction of 100-mile weeks? Is it simply maturity? Could it be that training solo better suits his style? Or is Will Leer's...

Is Something Wrong with U.S. Milers?

As runners line up for the first round of the men’s 1500 meters on Thursday at the USA Outdoor Track & Field Championships in Des Moines, none of them will have the "A"...

Will Leer’s Journey to Moscow Runs Through Southern California

Most twenty-somethings who relocate to Los Angeles do it to chase a dream. They don’t envision moving into their parents’ home or being in bed before 10:00 p.m. Then again, most twenty somethings aren’t elite athletes trying to revitalize their career.

LAWRENCE, Kan. – Eight of the nation’s top milers have agreed to race in the prestigious Glenn Cunningham Mile at the 2012 Kansas Relays it was announced by KU...

Will Leer Does the Albuquerque Double

Will Leer went to Albuquerque to battle Bernard Lagat and returned a double USA champion.  The Minnetonka grad had won NCAA DIII Championships, but the 3000m/Mile double at the USA Indoor Championships was his first, and second national titles. The double prompted one...

Against a field of pros at the USA Indoor Championships in Albuquerque on Sunday, 16-year-old Mary Cain elected to “keep it slow and kick it out” in the women’s...