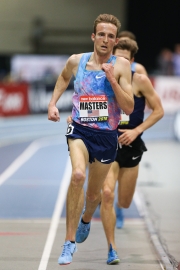 
Riley Masters retired as a professional runner in March 2021 (he had Achilles tendon surgery in June 2020).

In 2016, the two-time NCAA All-American in the indoor Mile while at the University of Oklahoma finished runner-up at the GNC Live Well Liberty Mile, running 4:03 on the roads in Pittsburgh, and in October, he won The Navy Mile in an event record 4:04 to secure the BBTM Grand Prix Tour title.

He is currently the school record holder in the 1500m for his alma mater. Masters' first sub-4 Mile came in 2010 when he clocked 3:59.97 indoors at the Boston University Valentine Invitational.

FUN FACT II: Masters was a volunteer assistant coach on the University of Colorado women's team that won the 2018 NCAA Cross Country Championship.

"Winning state titles when I was at Bangor, breaking 4 minutes when I was at the University of Maine and then winning the U.S. road championship are probably the three highlights of my career..."

Riley Masters opted for a subtle approach to make the public...

As I looked over at the clock and saw 3:59.97 next to my name, I was completely euphoric. Seconds earlier my body was as heavy and exhausted as it had ever been. In an instant, I felt immortal.

The story of my first sub-4 Mile began at Boston University in February 2009, when...

Former Bangor HS runner Riley Masters currently at the Univeristy of Oklahoma, but running unttached this winter won the Tyson Invitational Mile at the University of Arkansas on Friday evening. Masters clocked a huge personal best of 3:56.25 in winning, the time...